Are you part of the NICU club? Do you have a child who is still struggling with the effects of being born too soon from preeclampsia? Share your concerns and stories here among parents who have been there.
Locked
5 posts • Page 1 of 1

Hi, good to see you! Sorry to hear about the ear and breathing issues

I don't know anything about ears...but we are familiar with breathing issues. Alexander has been treated for asthma for the last couple of years (label or not doesn't matter I guess).

Alice! Hi! Good to see you over here.

Will the tubes lower her chance of language difficulties because she'll be able to hear speech more clearly?
Science! The articles you don't want to miss:
The Preeclampsia Puzzle (New Yorker) and Silent Struggle: A New Theory of Pregnancy (New York Times)
Looking for recent articles and studies?
A chance to participate in research? For us on Facebook or Twitter?

Caryn, @carynjrogers, who is not a doctor and who talks about science stuff *way* too much
DS Oscar born by emergent C-section at 34 weeks for fetal indicators, due to severe PE
DD Bridget born by C-section after water broke at 39 weeks after a healthy pregnancy
Top

Oh wow, Alice! He's gotten so big!!! Welcome back, good to see you around

I cannot believe that Henry is already 5.5 years old! He is tall (IMO, but hey, I am 5'1'' on a tall day) and skinny. He eats well (but doesn't like cooked vegetables) and enjoys going to preschool.

He had tubes placed in his ears around 6months of age, then again last year. That was when we discovered that his left ear never healed properly and he now has a 5mm hole that will eventually be surgically repaired.

We were recently told by his ENT that he will more than likely have a hearing aid next spring. His language is on track - but he has difficulty with certain sounds - sch, sh, ks in the middle of words. They are not uncommon, especially given that he was a preemie, is a boy, is bilingual and has a history of chronic ear infections.

He is very talented - he draws amazingly, designing manuals for the things he wants his dad, opa, uncle to build him, loves playing music and is a true clown.

I expect an asthma diagnosis in the spring - his ped says the diagnosis isn't usually made until they are closer to 6.

Sofia, my non-preemie, wow, what can I say? She still gets colds and stuff, but never to the same extreme as Henry.

BUT - the ENT has recommended permanent tubes for her ears. Has anyone else had them? Her first pair fell out in less than 1 year and she has chronic ear infections too ...

Here's a pic of Henry and I, one when he was a few weeks old and just came home, the other just the other day: 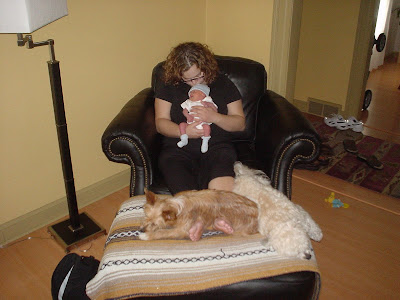 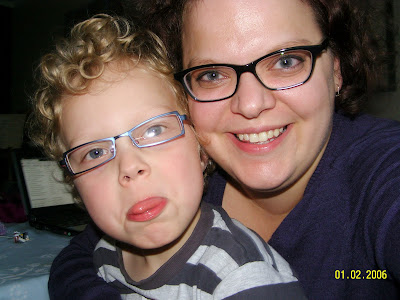 Very thankful for the PF - who I found after Henry was dealing with preemie issues.
Top
Locked
5 posts • Page 1 of 1

Return to “Parents of Preemies”

Users browsing this forum: No registered users and 9 guests