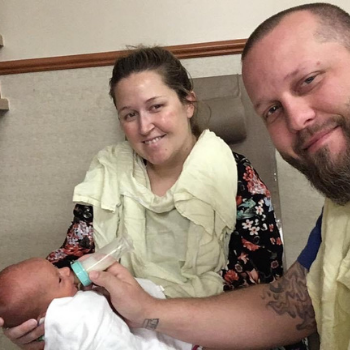 It’s February 2016 and we had just put down our 10 yr old Labrador. I felt different but brushed it off. We had been trying for 10 years to have a baby. A few IUI treatments that were unsuccessful and I personally wasn’t comfortable with IVF. We had actually just signed up to adopt through CPS and begin classes. I missed my period, which was usually regular. I took a pregnancy test. It was positive. I took several more- all positive. Doctors appointment confirmed pregnancy. We were ecstatic.

I loved being pregnant. I was fortunate enough to not really have morning sickness. All seemed to be going well until a thyroid check up. I was 31 weeks. My BP was 160/90. They sent me to my OB and it had gone down some but was still high so they put me on meds. I was also placed on bed rest. I tracked my BP daily. I began having nosebleeds and started see bright spots in my vision. But not knowing anything, I shrugged it off. I went in to the OBED for BP check and proteinuria check at 34 weeks. Both were still elevated so they sent me home to do a weeks worth of proteinuria checks where you dump your urine into a bucket. I had a follow up at 35 weeks and 4 days. I distinctly remember the nurse coming in and telling me that I was having a baby that day. My BP was 190/80. My emergency csection happened at 3pm. I remember the delivery and seeing my son. They had already started one infusion of magnesium. They took me back to the antepartum floor, and a whole 3 days are just non-existent for me.

I was in and out of it. My BP remained in the 200/80-90 range. I was swollen, tired, brain fogged, etc. On Monday my mom and I requested a Cardiologist. They found fluid around my heart and my organs were failing. My son was now in the NICU. I had all but held him for a few hours total- many of which I don’t remember. I was placed in the ICU for 2 days on Lasix. I just remember feeling like I was going to die and that the child I had longed for would leave their without a Mom.

I was terrified. My husband was exhausted and terrified. Never had I imagined experiencing this kind of birth story. By Thursday I was back on the antepartum unit and could now see my baby in the NICU. The hardest part of it all is I can’t remember what he weighed or how long he was when he was born. I didn’t get those first set of snuggles. I didn’t get the picture perfect birth story, but we all made it home. I still suffer with anxiety and depression. I did find out later on that my paternal grandmother suffered with preeclampsia with HELLP during her 1st pregnancy and so did my aunt, my dads 1st born sister. So lessons learned, if anything feels strange or abnormal during your pregnancy- say something. I’m thankful to be alive today with a happy and healthy 4 year old.

It woke me up around midnight. The pain started as a dull ache at the top of my belly on the right side, no immediate feeling of danger, just...