A Letter to Kaari 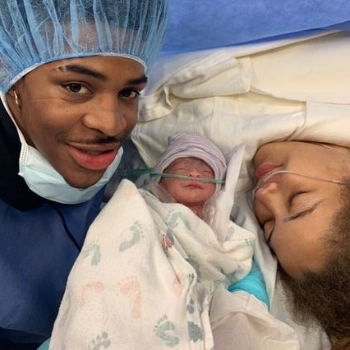 It was January 2019 when I found out I was pregnant with you. I immediately scheduled an appointment to find out if you were a boy or a girl – but it was so early the doctors couldn’t tell us yet. I was only 19 and your Daddy and I didn’t know much about what pregnancy entailed, other than cravings and morning sickness. We had no idea we were in for a frightening rollercoaster ahead. But what we did know, was that no matter what, we couldn’t wait to be your parents and welcome you to the world with love.

At 13 weeks, we finally found out we were going to have a beautiful baby girl. We knew you would be Daddy’s little girl, and Mommy’s new best friend. Looking back, from that moment until your big arrival four months later, time flew by.

For the next four months, we traveled all across the country. We went to Hartford, CT to watch Daddy dominate in the NCAA Tournament. We went to Arkansas and South Carolina to visit with your grandparents. We traveled to New York to watch Daddy be picked No. 2 overall in the NBA Draft. We also spent a lot of time in Bradenton, FL where Daddy was working hard to prepare for his rookie season. Throughout all of this travel, we had monthly or bi-weekly doctor’s appointments to check up on you. At every appointment, Daddy or your grandmother Jama was right there with us. We were so happy when the doctors kept telling us everything looked great. Your heart rate was strong, you were growing and I passed my sugar test. There were no signs that warned us for what was to come.

It all happened so fast. A week before you entered the world, I started feeling a little off. I tried to be strong and fight through the discomfort. I figured some of it must simply be the effects of a pregnancy, but I know my body and I felt like something wasn’t right, so I decided to go see my doctor. I left a sample of urine, but other than that, I left the office without any explanation of what could be going on. That was my first mistake. I wish I had been more adamant and pushed my doctor for real answers.

Two days later, I was at the beach and I noticed I had started spotting, and was experiencing excessive weight gain. I called my doctor, but once again, got no real answer as to what could be wrong and why I was still feeling off. Instead, I got a general “That’s normal in pregnancy. Call us if it gets worse…” And then, things quickly took a turn.

Thankfully, your Aunt Shelly and Aunt Alexa were insistent on getting me back home. We cut our beach trip short, and headed back to Memphis. They both noticed how pale and swollen I looked. They could see noticeable growth in my stomach in just two days. I was also experiencing mild headaches and my vision felt slightly off. We arrived back in Memphis on August 5 and had no idea you would be making your debut in less than 48 hours.

Daddy had just bought us a brand-new car so we would be prepared for your arrival. I offered to go pick up pizza for dinner so I could take the car out for a drive. The Dominoes was only a little more than a mile away. In that short trip, my symptoms began to get really severe. On the drive home I felt my vision becoming extremely blurry. I slowed down my speed and carefully made it home. My head hurt so bad at this point; I could barely keep my eyes open. We didn’t know what was happening. We started to Google my symptoms and as Daddy was reading, he said, “This says it means the baby’s about the come!” I laughed it off because there way no way. You were supposed to stay inside of me for nine more weeks.

I was still in pain and my vision still wasn’t normal, but I went to bed and tried to push through. I woke up crying because the pain in my head hurt so badly. Thankfully, Daddy was there to comfort me and helped me fall back asleep for a few minutes. Around 3 a.m. on August 7, Daddy woke up because I was hitting him as I was having seizures and couldn’t control my body. I had never had a seizure in my life, nor had I even seen anyone else have one. It was so scary. I became unresponsive and didn’t feel in control of my body. I felt helpless. I had no idea if I would be OK. I began to worry for my life and yours. When I regained consciousness, my body and mind were so weak, I just prayed, “Dear God. Please let my baby be OK. Please don’t take us both from this world. I don’t want Ja to be left all alone.”

It’s easy to forget about dads when going through pregnancy, because they don’t carry the baby. But Daddy deserves all the credit and recognition for how he handled this traumatic situation. He was strong for all of us. I remember hearing him scream for your Uncle Tap to come help. They immediately called your grandparents and the paramedics. Before I knew it, I was in an ambulance headed for the hospital. Daddy wasn’t allowed to ride with us, but he followed closely behind. I was in the ambulance and had another seizure. Once again, I closed my eyes and prayed.

We arrived at the closest hospital, but were soon transferred to another that was better equipped to handle trauma and premature deliveries. Then, we finally received some answers. I was diagnosed with a severe case of Eclampsia, which is when you have seizures during or after pregnancy, typically caused by high blood pressure. The doctors told me they needed to deliver you today in hopes that my blood pressure would stabilize. Nine hours after my first seizure, I had an emergency C-Section and on August 7, 2019 you arrived. I laid there barely responsive, but I remember hearing the doctors tell me to smile because you were right next to me.

I still couldn’t open my eyes, but I smiled because I knew you were OK and my prayers were answered. During those nine hours, I felt so weak. But when I heard your first cry, I knew it was time to really fight. I had to be strong and recover so I could always be here for you.

When I woke up from surgery, I assumed the worst part was over, but in reality, it had just begun. None of my symptoms were gone. My blood pressure was alarmingly high. The vision in my left eye was almost completely gone. And worst of all, I still hadn’t seen your face because you were in the care of the NICU. I tried to keep my spirits up as everyone came to visit me in the hospital, but it was hard. Everyone looked at me with pity because I was in such bad shape. One nurse told me, “You’re really lucky you weren’t alone and Ja was with you. He probably saved your life.” Hearing those words hit me hard. I realized the severity of what we just went through. I didn’t know how to handle it, so I chose to keep it inside, and put a smile on. I told myself I should be thankful to be alive, not feeling sorry for myself.

I had multiple doctors and nurses coming in for exams and constantly had to take different doses of nifedipine because they still couldn’t get my blood pressure to regulate. I went through several eye tests and scans to see if my sight was permanently damaged. I was told I had PRES Syndrome, which is linked to Eclampsia and that my sight would come back over time. I remember feeling so overwhelmed. I didn’t know what any of these terms meant. I was so uneducated on what was going on with my own body. I didn’t know any of this was even possible. I was young and healthy, and I just didn’t understand how this could have happened to me.  Now I know Eclampsia doesn’t discriminate. It doesn’t care about your age or your race.

It was a long road to recovery for you and me. You were in the NICU for six weeks and I was being driven to countless doctor appointments to monitor my health. After almost three weeks of medicine and nonstop blood pressure tests at home, I finally started to get better. My blood pressure went back to normal. My vision was slowly returning. But I still felt so much hurt because you couldn’t be home with us. I thought to myself – I never want any mother to feel this kind of pain, to not be able to care for her child in the first moments of their life.

Today, as I reflect on this experience, I realize how many signs and symptoms I missed. I didn’t know any better. A few days after your birth, I listened to a voicemail from my doctor informing me I had high levels of protein in my urine, which is an indicator of Preeclampsia. I listened to that voicemail two days too late. My condition had already rapidly progressed, and you were already here two months earlier than expected. I felt so guilty. I kept wishing I heard that voicemail sooner. I felt like I was the reason you were in the NICU and I didn’t do enough to prevent it. If I had just known the signs, or if I had answered the phone when the doctor called. I had no idea what Preeclampsia was, or how to prevent it. No one educated me and I don’t want any other woman to go through something that could be prevented. I knew I had to find a way to tell our story. Even if it only helps one family, that’s enough.

I was so happy to find the Preeclampsia Foundation. They work to educate and bridge the gap between patients and healthcare providers. They have several resources and dedicated people working to help women and families similar to us. I am so inspired by their work, and thankful to know this organization exists. I knew right away their mission was something I wanted to support. Beyond improving education, I also want to work to limit racial disparities in healthcare, because black mothers and infants die at a much higher rate when giving birth. I will work hard to help better educate pregnant women on Preeclampsia and other conditions they may experience. I want you, and all women, to have a better experience than I had. Everything I do is for you, and I promise to make a difference.

Ja Morant and KK Dixon are the Honorary Chairs of the National Promise Walk Wherever for 2020. Please support their team here.

After weeks of nightmares, phantom pain of an IV burning, of my twice-a-day alarm reminding me to take my BP medication, I remember crying to...