Joy Comes In the Morning Part One 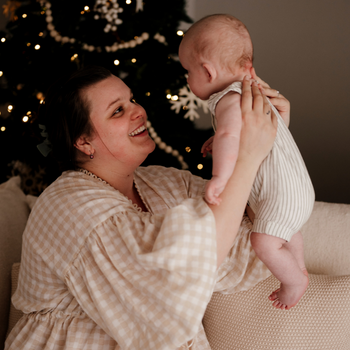 This is the start of your story, sweet boy. It's the story not just of your beginning, but mine as well, because I walked away from your birth a different person to the one I was before it.

My pregnancy with you wasn't easy, but wasn't overly difficult either. My blood pressure was high from the start, which meant more frequent appointments with OB's, and many short stays in hospital to check my blood pressure over a few hours each time. I went on maternity leave at 29 weeks on the advice of the doctors to try and keep my blood pressure down.

From my antenatal appointments, I knew that hypertension was the biggest risk factor and that the other requirement for a diagnosis of preeclampsia was protein in the urine. Until about 30 weeks, hypertension was my only symptom, but during the last few weeks of pregnancy things changed. I started to get headaches, and my vision went a bit blurry with little spots all over the place. My feet, legs, hands and face started to swell until I could press my finger into my skin and have a deep indent that stayed there for a little while. But, without protein in my urine, preeclampsia wasn't discussed. My right shoulder started to hurt, which I shrugged off as an old rotator cuff injury and was told not to worry about it, when it was actually my liver expanding causing referred pain. I got carpal tunnel syndrome in both wrists, which made doing some very basic things difficult when combined with my swollen fingers. When I started to stack on weight quickly and get more short of breath, it still wasn't discussed, and instead an OB tried to refer me to an obesity clinic. Even though I had been grilled on preeclampsia indicators my whole pregnancy, I was reassured at every appointment not to worry about it. But something didn't feel right. The trouble is, when you have health anxiety, something always doesn't feel right and it's hard to distinguish a true worry from a false one.

On a Sunday afternoon at 34 weeks and 1 day pregnant, I thankfully decided to listen to my gut and go to hospital. I'd already run my increasingly sharp headache by an OB and they told me it was nothing to worry about unless it persisted for over a week, but something didn't sit right with me. I also noticed that my blood pressure readings on the cuff I had at home were high, erratic and inconsistent. At the time, I just assumed the cuff was broken, because it didn't seem possible to have so much variety in one day, or even one hour. As usually happens when you call with a symptom while having hypertension during pregnancy, I was "invited to come in" for an assessment.

The OB walked into our cubicle and said that I had preeclampsia, and that I'd need to stay in hospital to try and manage my blood pressure. For the next 6 days, I stayed in hospital, between the acute assessment unit and the antenatal ward. My blood pressure continued to be an enigma, leaving each nurse, midwife and doctor confused about why it wouldn't respond to the ever increasing doses of medication.

On the Wednesday, I felt really unwell for the first time. My head was pounding and the room was spinning. My blood pressure was taken a dozen times by different people, all with readings that were somehow too high and too low at the same time - a medical mystery, I was told! Eventually it moved away from hypertensive crisis back to the severe category, and I continued on. My arms had burst blood vessels from the number of times my pressure was being checked every day and night, and how tight the cuff had to go to get the readings. I chugged along, the same routine of tests and bedrest every day.

On Saturday at 7:30pm, the midwife took my blood pressure and with a look of panic in her eye, said  "I don't want you to panic, but I have to do this. There's going to be a lot of people in here, really quickly" as she pressed the red emergency call button on the wall behind me.Within what felt like a minute, between 10 and 15 people were standing around my bed. Some were on the phone to their big bosses, some were talking to each other in hushed tones, and some where whizzing around me, checking my vitals and doing tests. They ran their fingers from side to side in front of my eyes and asked me to tell them when I saw double, nodding knowingly when I confirmed. They hit the reflex hammer against my knees, which bounced off the bed higher than they had ever done. I knew from my own research that hyperreflexia was a sign the preeclampsia had progressed, but didn't know that combined with my blood pressure in that moment, it was an indication of an oncoming seizure. I'm grateful for how well the team managed the urgency without terrifying us unnecessarily in that moment, moving very quickly to save my life which was now in danger.

I started to shake and contract in my legs and abdomen, like my body was trying to do sit ups involuntarily. I thought it was from terror and adrenaline, but I'd later learn that I was starting to convulse and the reason for all the hurry was to try and prevent me progressing to eclampsia now that my neurological functioning was being impacted. Retrospectively, I marvel at the timing of how it all happened before it was too late.

This is the start of your story, sweet boy. It's the story not just of your begin...