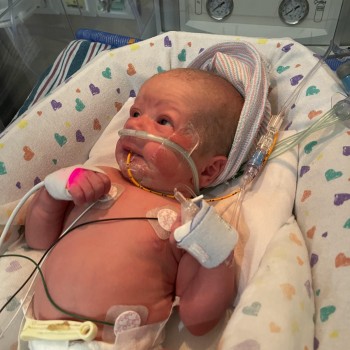 In the summer of 2017, my husband and I found out that we were expecting our first. We were high school sweethearts entering our fifth year of marriage and the timing seemed perfect. At 12 weeks, I went for an ultrasound only to be told that the baby was without a heartbeat. I was completely devastated. After a D&C, we decided to wait two months and try again.

Just like that, I began my second pregnancy a few months later. This time was full of emotion as I tried to ward off the horrifying memories of the miscarriage while also looking forward to new life. Around month seven of my pregnancy, I began seeing what I called "stars," and having headaches. I attributed both of these to it being a hot Georgia summer and me being in my third trimester. But at my 34 week appointment, my doctor commented that my blood pressure was elevated. At that point, I began going in weekly for blood pressure checks. At 36 weeks, the doctors told me that my pressure had jumped to 168/95, and that I needed to do a urine sample to check for proteinuria. The sample came back positive. Next, they drew labs and discovered that my platelets had dropped to 101. They began the induction process that night. After Cervidil, pitocin, and an epidural, I delivered Clayton Graham. He weighed 6 lb. 8 oz. and only stayed in NICU Bed #5 for 12 hours before they released him back to my room. 48 hours later, we went home and I began taking Labetelol for high blood pressure. One week later, I went in for a blood pressure check and my pressure had not improved at all. They doubled my meds at that point. At my six week postpartum check up, my blood pressure had normalized, but I was still taking a high dosage of Labetelol. After standing up off of the exam table, I blacked out and fainted. Thank goodness I fainted at the hospital and not while driving! I discontinued the BP medication at that time, and went onto live a happy postpartum life with my son.

Fast forward to the summer of 2020. In the middle of the pandemic, I became pregnant with my baby girl. I went to the same medical group as my first pregnancy, and was treated as a high risk patient because of my history. I was not allowed to see the midwives, only physicians, because they knew more about my medical background. At 32 weeks, my blood pressure was elevated, and I started going in twice a week for NSTs. Baby girl was always doing fine, but my pressures continued to stay elevated. At my 36 week appointment, I mentioned to my physician that I had not been feeling well, but that I couldn't quite identify the problem. She sent me home and told me to call if I had a migraine, blurry vision, or pain in the upper right quadrant of my belly. The very next day, I was in tears over the pain I was experiencing in that upper right quadrant. My nails and urine had turned orange, and I knew that I needed to get to the hospital right away.

Unfortunately, I had entered severe HELLP territory. My platelets were at 49 and my liver enzymes were off the charts. I was going to have to deliver without an epidural while on Magnesium. Throughout my labor, I was mostly silent. I just looked forward, focused, and breathed. The Magnesium was brutal, but I knew that it was keeping me safe. Less than 24 hours later, I birthed Heidi Jane. My 5 lb. 10 oz. of sweetness, but she was not crying, and I knew that something was wrong. The nurse by my side (who coincidentally also delivered my first) was looking me in the eye telling me that this is to be expected and that she would be going to the NICU for a while.

Three weeks later, we ended up in the PICU in Atlanta with Heidi's lungs struggling to fight a common cold. After 8 days, we brought our princess home again! Our family is now complete.

In the summer of 2017, my husband and I found out that we were expecting our first. We were high school sweethearts entering our fifth year of marr...